Here are a few links for research supporting the claim that Meditation increases empathy.

2. Tania Singer: a. The neuronal basis and ontogeny of empathy and mind reading: Review of literature and implications for future research; NaBR, 2006 article HERE; b. Empathy for Pain Involves the Affective but not Sensory Components of Pain – Science, 2004 article HERE

Tania states: “We propose two major roles for empathy; its epistemological role is to provide information about the future actions of other people, and important environmental properties. Its social role is to serve as the origin of the motivation for cooperative and prosocial behavior, as well as help for effective social communication.”

3. Hein and Singer: I feel how you feel but not always: the empathic brain and its
modulation;article HERE

CLARIFICATION NOTE: Empathy is the capacity to recognize or understand another’s state of mind or emotion. It is often characterized as the ability to “put oneself into another’s shoes”, or to in some way experience the outlook or emotions of another being within oneself. It is important to note that empathy does not necessarily imply compassion. Empathy can be ‘used’ for compassionate or cruel behavior.

Emotional Contagion: The tendency to express and feel emotions that are similar to and influenced by those of others. One view of the underlying mechanism is that it represents a tendency to automatically mimic and synchronize facial expressions, vocalizations, postures, and movements with those of another person and, consequently, to converge emotionally (Hatfield, Cacioppo, & Rapson, 1994). see WIKI

Compassion: Profound human emotion prompted by the pain of others. More vigorous than empathy, the feeling commonly gives rise to an active desire to alleviate another’s suffering. It is often, though not inevitably, the key component in what manifests in the social context as altruism

Schadenfreude: Enjoyment taken from the misfortune of someone else

Tania and her imaging lab has been looking at these components of emotion in experienced, long-term meditators like Matthieu Ricard 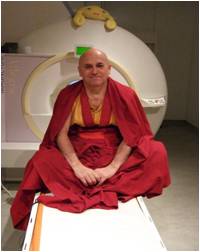 Matthieu preparing to demonstrate compassion in the scanner